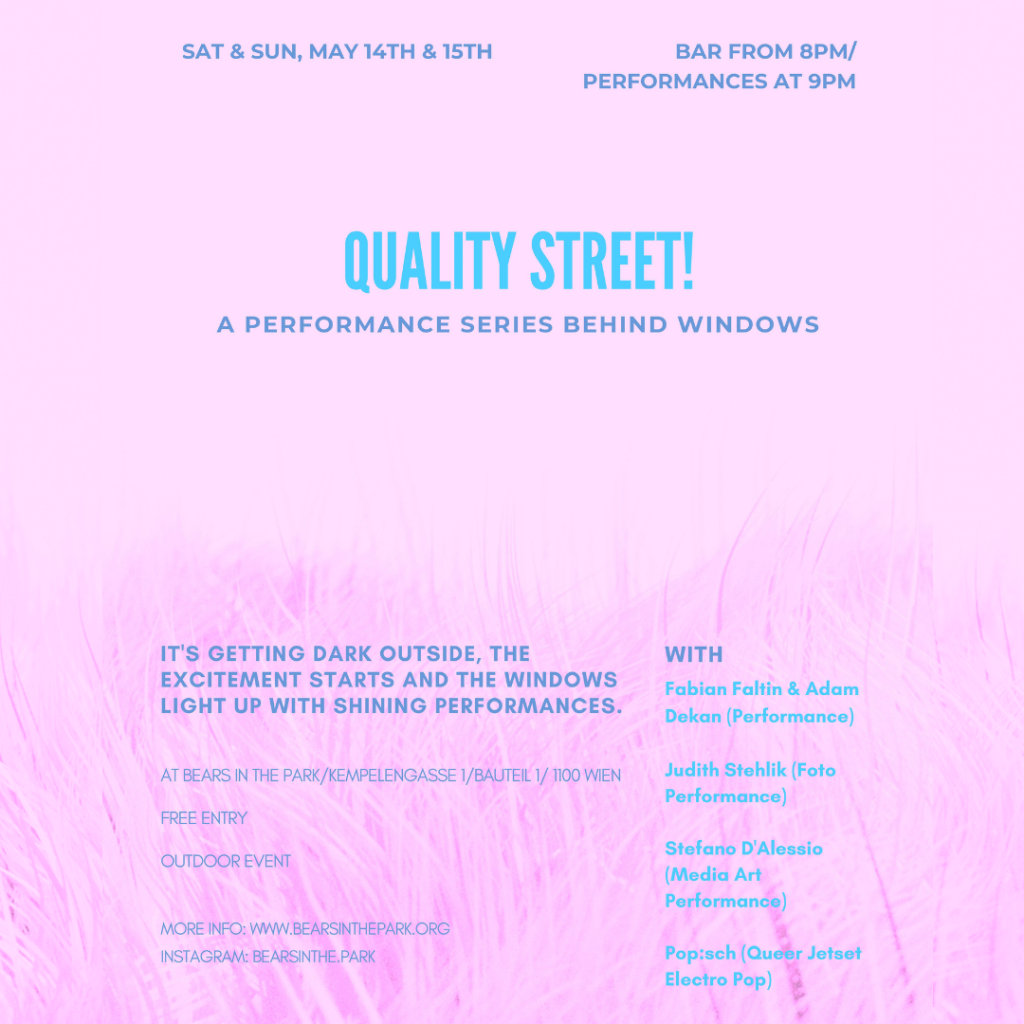 An evening to remember: When it is slowly getting dark the audienceis assembling infront of the studios at Kempelenpark waiting for something to happen. A light goes on and there it is a performance, visible through a window.

“Quality Street” is a performance series behind windows. Instead of standing or sitting infront of a stage, the audience gathers outside, idealy with a drink in one hand in a mild early summer night. Each room will then light up for 15-20 minutes revealing one of the very distinct performances of the evening.

Fabian Faltin & Adam Dekan
“My Hobby is my Castle”
Between aristocratic fantasy and corporate nightmare, this performance traces the Habsburg exodus from Switzerland in 1415 to the Battle of the Bears in Kemplenpark 2022. Operating in the grey zone between cutting-edge performance art and old-fashioned high-school drama, Dekan & Faltin explore contemporary notions of middle-class nobility, window cleaning and immaterial wealth.
Fabian Faltin & Adam Dekan recently showed their acclaimed “House of Hyperculture” in brut nordwest  and launched a new channel for performative online learning, Hyperskills.

Judith Stehlik
“Feel the body”
contemporary female artists meet in dialogue.
As protagonists of this dialogue, they assume various poses of artists of other generations for the duration of the photographic act and re-enact these constellations.
All the artists portrayed are invited to assume their own poses, postures and gestures for the duration of a three-minute Super 8 film, without influence or example, entirely on their own.
The focus is on the perception of their own physicality in this moment. Some of these black and white Super 8 film portraits of female artists will be shown at Quality Street.Stefano D’Alessio

Pop:sch
Queer Jetset Electro Pop
Pop:sch are a Vienna based queer electropop band. Their style can be described as a blend of bubble gum pop and beat driven 80s synth music. Currently they are working on their second album.

Stefano D’Alessio
“Blue Light” plays with its environment using an interactive and sound reactive light system. The space hosting the piece is rhythmically and dynamically lit by an array of five lights, these are carefully positioned in the space to create a communication between the location, the sounds and the performer. The performance proposes novel ways to “play” spatial visuals and sounds, exploring alternative interactions between human and smart devices. Two iPads and an iPhone are used to capture and stimulate gestures and body movements while creating a site specific audio/visual dramaturgy. They become performative instruments, used to play sounds in different ways, affect the performer’s voice and control lights dynamically.

May 14th & 15th at Bears in the Park, Kempelenpark, Vienna

The entry is free. No prior registration is needed.

The park and all the facilities are accessible by wheelchair.

For more info and a peek into the previous “Quality Street!” performance night.